Consulate General and Promotion Centre of the Argentine Republic in Mumbai

The world says good by to Quino, Mafalda's "dad" 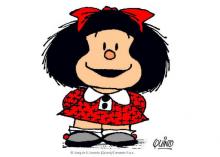 "Quino has died. All good people in the country and in the world will mourn him," Divinsky, head of Buenos Aires publisher Ediciones de la Flor, wrote on Twitter.

Under the pen-name "Quino", the cartoonist created Mafalda in 1964, and the strip became popular in newspapers across Latin America, Europe and much of Asia before being turned into books.

Quino was born in Mendoza, Argentina in 1932, the son of Spanish immigrants. He studied at the city's college of fine arts before having his first cartoon published at the age of 18.

He created Mafalda -- an irreverent 6-year-old who hates communism and soup and loves The Beatles -- for an advertising campaign for electrical appliances.

In the series, Quino reflects the world of adults as seen through the eyes of a group of children, with the ironic, non-conformist Mafalda the central character.

Following the military coup in Argentina in 1976, Quino fled to Milan, before becoming a Spanish citizen in 1990. He has lived alternately in Madrid, Paris, Milan and Buenos Aires.

Apart from numerous international prizes for graphic humor, he was awarded Spain's prestigious Prince of Asturias award for Communication and Humanities in 2014. News Yahoo